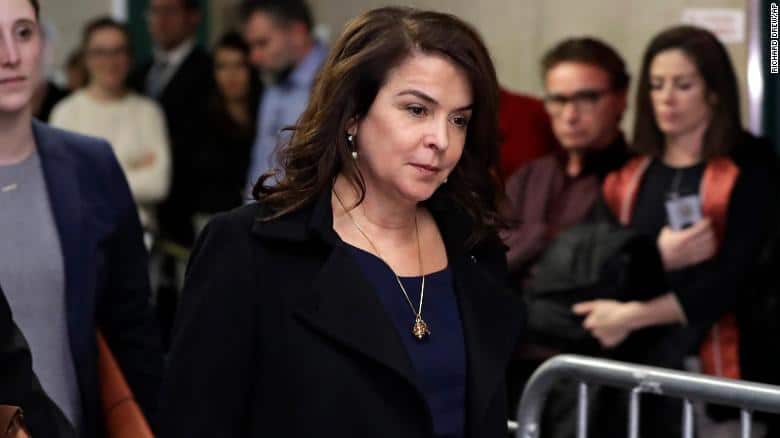 “He kept coming at me,” Sciorra told jurors. “I felt overpowered because he was very big.”

The testimony was emotional and powerful, but not surprising. Sciorra originally came forward about the attack with the New Yorker in October, 2017.

What we didn’t know was how Weinstein’s defense team was going to try to discredit her claims. We knew they would try, but given the nature of these trials, not knowing what was up their sleeve left a lot of tension.

Donna Rotunno, head of Weinstein’s legal team, showed jurors a clip of Sciorra on the Late Night with David Letterman Show from 1997 in which Sciorra jokes with Letterman that she’s been known to make up absurd lies when speaking to the press. Sciorra said she would make up “elaborate stories” when she felt uncomfortable talking about her personal life.

In the clip shown in the courtroom, Letterman laughed and asked Sciorra, “How do I know you’re not lying now?” To which Sciorra answered, grinning, “You don’t.”

That’s it. That was the defense.

Weinstein’s legal team wants jurors to believe that Annabella Sciorra can not be trusted in a testimony under official courtroom oath about vivid details of a rape from 25 years ago because she once made jokes on a–wait for it– comedy show.

We’ve heard from multiple sources what a bulldog Rotunno is in the courtroom. But if today’s cross examination is all they have to defend their client? It’s safe to say they’re sinking fast.

On why she didn’t report to authorities, Sciorra it was “because he was someone I knew,” adding, “I would say I felt at the time that rape was something that happened in a back alleyway in a dark place” and committed by a stranger.

Rotunna challenged this claim on cross-examination by suggesting that because Sciorra was 33 years old at the time, she must have known what rape was by them. She went on to question the decisions Sciorra made that allowed Weinstein to enter her hotel room in the first place, asking her why she opened the door without knowing who it was, asked why she didn’t run, why she didn’t try to get to a phone for help, and why she didn’t go to the hospital after.

In case it needs to be said, VICTIM BLAMING is when the victim of a crime or a wrongful act is held entirely or partially at fault for the harm that was brought on them, with the implication or direct accusation that the victim is in some or all ways responsible for the actions of the offender.

Tomorrow, the prosecution is bringing Dr. Barbara Ziv on the stand as a forensic psychiatrist who has spent decades working with sex offenders and victims. She was the first prosecution witness at Cosby’s retrial.

Editor’s note: Voices in Action stands with survivors and takes all accusations of sexual misconduct, assault, abuse, and rape seriously. We stand with and believe Annabella Sciorra and applaud her bravery. Thank you, Annabella.