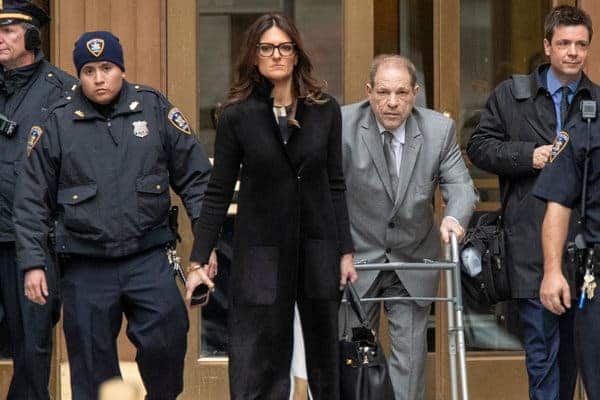 I’ve been following the Harvey Weinstein trial since it started just over a week ago and I have questions. Many questions. We all do, I know. But there’s one that really keeps haunting me and every time I see another photo like the one below, it bothers me more and more: Are we really sure that’s Harvey Weinstein fake-hobbling his way in and out of the courtroom? Because I’m 80 percent sure it’s the Mucinex monster. I’m not trying to be insulting here, just trying to make sure we’re bringing the right monster to justice. I’m sure the Mucinex monster has committed his share of grievances, obviously. But even that thing can’t be as gross as HW.

Leading the Mucinex monster himself out of court today, as always, was the Honorary Benedict Arnold of all women, Donna Rotonnu. I’m even hesitant to call her that because, ever the feminist contrarian, she would undoubtedly revel in it. But the woman has made a career for herself defending men accused of sexual assault. It’s important to note that of these types of cases, she has only lost one.

So what does a woman who willingly stands in defense of the Mucinex monster have to say for herself, exactly?

Well, The New York Times claims she describes herself “a reasonable-minded independent,” who finds it disheartening that the #MeToo movement has affected the daily relationships and interactions between men and women.

“It’s sad,” she said, “that men have to worry about being complimentary and pleasant to women.”

I apologize for not leading this post with a warning to bring tissues for how sad you now feel for men everywhere. What ever would men do if they didn’t get to tell us how great we looked in that new dress? Or how much they loved our hair long? They might develop a twitching eye that never quite goes away if they’re not able to metaphorically verbalize their lack of complete impulse control and weakness to a beautiful smile or a cup size. My heart goes out to all affected.

Recently, Rotonnu rallied against the #MeToo Movement, saying, “What happens with #BelieveAllWomen is that we’re just supposed to believe you without any pushback, or questioning, or cross-examination. I think that’s dangerous.”

The New York Times reports that she said in an interview, “If we have 500 positives that come from a movement, but the one negative is that it strips you of your right to due process and a fair trial, and the presumption of innocence, then to me, not one of those things can outweigh the one bad. We can’t have movements that strip us of our fundamental rights.”

Rotonnu has laid out her strategy: She not only wants a jury of Weinstein’s peers to believe that the sex he had was consensual, but that it’s the women who claim he attacked them who have unjustly manipulated him.

She better hopes she found a lot of Mucinex membranes for that jury box.